Cobblestone lanes and steps lead out of Petrov to one of the two major squares of Brno. This is the square of Zelný trh, the busy vegetable market centred around the Parnassus Fountain of 1695 by Johann Bernard Fischer von Erlach. The central building on this square, the quite plain seventeenth-century Palace of Dietrichstein, has been converted into a Moravské museum. Specialising in the history of Moravia, this museum features some folklore and craft displays.

The prized possession of the museum’s prehistoric discoveries is the ‘Venus of Věstonice’, which is 27000 years old and the first ceramic (or fired clay) figure ever found depicting the human form.

Upon departing from the palace, go right and pass through the metal gates to the Bishop Court-yard where the, rather less enthralling, Biskupský dvůr museum is dedicated to Moravian coins and fauna (featuring a record-setting hoard of cicadas). At the bottom of the slope, in the square of Kapucínské, is the undecorated Capuchin Monastery, where one hundred and fifty mummified bodies were placed exposed and clothed in its’ crypt. A macabre sight, but not out of place in the centre of Europe; this practice was halted on the grounds of health in 1784. Within the final room, twenty-four Capuchin monks lie on the ground, with their heads raised on bricks; some are alarmingly well-conserved after two hundred and fifty years. Visitors can attend a permanent exhibition whose part is a tour of the Capuchin crypt with mummies.

Spanning Zelný trh, you can view, from here, the complicated Old Town Hall steeple, appearing like a parade of spiky Ottoman helmets. The Gothic Portal was designed by Anton Pilgram in 1511, who purposefully made the pinnacle at the centre look as if it was about to fall over. Pilgram later decorated the Cathedral of St Stephen’s in Vienna with his carvings. Suspended in the archway entrance is the renowned Brno Dragon, distinguishable as an alligator on amount; it was offered by a delegation from Turkey to Matthias Corvinus. Brno’s population has a liking for this distinctive gift and the cart-wheel suspended on the walls. Georg Birk, who was a carpenter, made a bet, in 1636, that he would be able to take the wheel from logs and roll this for thirty-five miles (fifty kilometres) from the village he lived in Brno in a single day. He succeeded in this bet.

Past the Hall of the Old Town is the St Michael Dominican Church of 1655, which features the normal selection of baroque style altar-pieces and statuary, though the carved decor over the pulpit looks as if a bomb’s gone off in heaven. This church is adjacent to the baroque style New Town Hall. Originally, this was the monastery of the Dominicans conceived, in the 1690s, by the Grimm brothers. 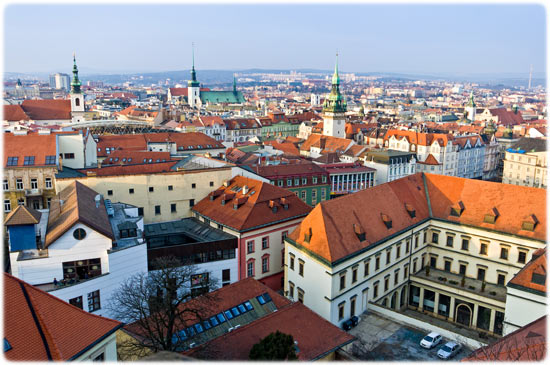